We had a look in an important survey made by the European Commission in 2017 on the use of ICT and e-commerce in enterprises and found some very interesting results, figures and facts, that are relevant to our project. In particular, they point out differences among European countries and among countries in the use of ICT and e-commerce. The survey confirm the relevance of EU project in this field.

We made a summary of the 3 most important findings of the project. If you are interested by all the findings of the European survey you can further read under the link here!

Results of the 2017 survey on ‘ICT usage and e-commerce in enterprises’.

During 2016, one out of five enterprises in the EU-28 made e-commerce and sold products online. The percentage of turnover on e-sales amounted to 18 % of the total turnover of enterprises with 10 or more persons employed.

This points out that the field will increasingly grow also in the coming time, brining job opportunities for people all over Europe with skills in the field!

Wide variation in the share of e-sales among countries

E-commerce can be done via websites or apps (web sales) or in an automated way via EDI-type messages; enterprises may offer one or both options to their clients. In 2016, among the EU-28, the percentage of enterprises making e-sales ranged from 8 % in Romania to 33 % in Ireland, closely followed by Sweden (31 %), Denmark (30 %) and Belgium, Germany and the Netherlands (each 26 %).

As we notice, there are huge differences in the use and implementation of e-commerce within European countries…This may a good reason to further start an implement future common European projects in the field of e-commerce and use of ICT within enterprises. 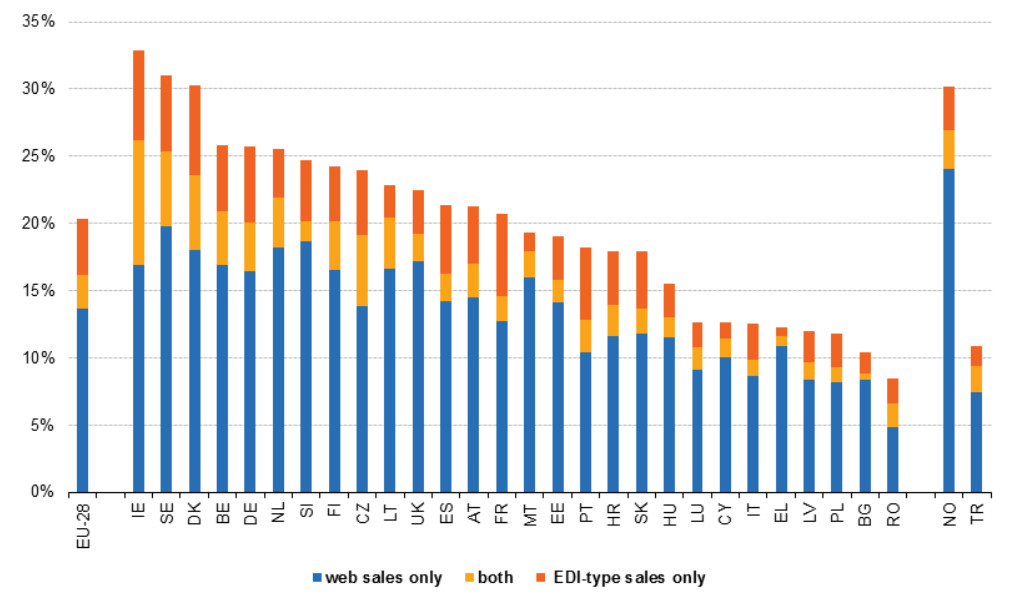 E-commerce enables enterprises to establish their presence in the market at national level and also to extend their economic activities beyond borders in order to pursue opportunities elsewhere. Moreover, e-commerce has the potential to reshape the European Single Market for enterprises and private consumers by enabling price and product-related comparisons in a borderless market environment.

As we here notice, e-commerce doesn’t always bring internationalization of customers and increase of business in other countries. On the other side, there is only a side effect of it on the internationalization. In this case also, some differences appear at European level even thought they are not as big as in other aspects of e-commerce and ICTs.